Though FEMEN activists came out in small numbers (in tens rather than hundreds or thousands) their actions had a big ripple effect on news and social media sites. No big surprise there, the image of a woman protesting with bare breasts, sometimes resulting in her being forcibly removed by men on the scene, is a strong one. Combined with a message of liberty for women in the Arabic/Islamic world, that’s a recipy for media success. Whether the actions contribute to the emancipation of women in Islamic countries is a serious issue, especially when some protesters didn’t just attack cultural and religious oppression of women, but Islam specifically. One telling examble that offended the anti Femen crowd is a picture of a squatting woman with a fake beard and unibrow as well as a green turban. Around her breasts she’d painted haloes, a symbol associated with Islam. 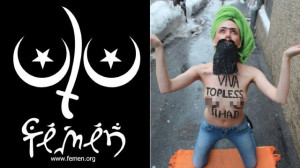 The problems of this type of activism is elequently described by Sara Salem, Dutch Egyptian publicist and researcher at the International Instute of Social Studies:

“…While there is much to be said for tactics that shock society, and while it may be, as some argue, that these activities are the only ones that can lead to radical change, it is interesting to consider whether this has historically and universally been the case. Indeed it would appear that in Egypt, for example, it has been grassroots mobilization that makes use of local contextualized symbols, values and norms—albeit reformed—that has led to noticeable changes. While this debate is controversial, it is certainly one that needs to be applied to the case of Femen in the Middle East.
Although Aliaa el Mahdy’s topless protest late last year certainly caused a stir inside Egypt, it is questionable whether it sparked debate about the role of Sharia’ and gender. On the other hand, more recent initiatives, including groups like Operation Anti-Sexual Harassment that have formed to oppose sexual assault, have relied on grassroots activism to challenge the same gender norms and inequality that Aliaa was trying to address. These efforts have been successful in starting a widespread debate in the public sphere about sexual harassment, gender inequality, and the role of women in post-revolutionary Egypt. …”

Meanwhile the Facebook page of Muslim Women Against Femen keeps growing. Muslim women, showing hair or donning head or face scarf hold signs which say they do not need to be liberated, especially by shallow western activists. The community description reads: “Muslim women who want to expose FEMEN for the Islamophobes/Imperialists that they are. We are making our voices heard and reclaiming our agency!” 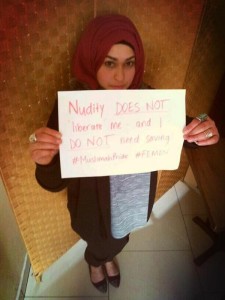 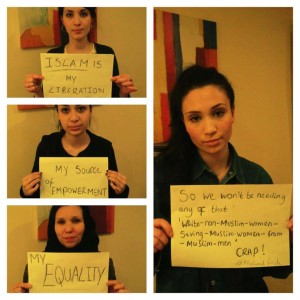 To the pictures posted on the Muslimah Facebook page FEMEN leader Inna Shevchenko replies: “through all history of humanity, all slaves deny that they are slaves. … They write on their posters that they don’t need liberation but in their eyes it’s written ‘help me.'”

While the statements of Shevchenko make it hard to sympathise with FEMEN, the Muslim Women’s response obfuscates a serious issue. The nude activism of Amina and Aliaa is as much native to the Arab world as the Islamic response. Amina does not represent Muslim women (as written in one of the pictures on the Facebook page) because like Aliaa she rejects religion as her identity. Which of course is not just a local reaction to native culture, but also changing social norms, the very modern rise of Islam in politics and religion as a binding regional identity. If Amina and Aliaa’s protests are the result of Imperialist cultural brainwashing, so are the statements of Muslim Women Against Femen. Their insistence of finding freedom in a personal religion, which they choose and interpret themselves, is as much influenced by foreign social and cultural currents as the decision to reject religion.