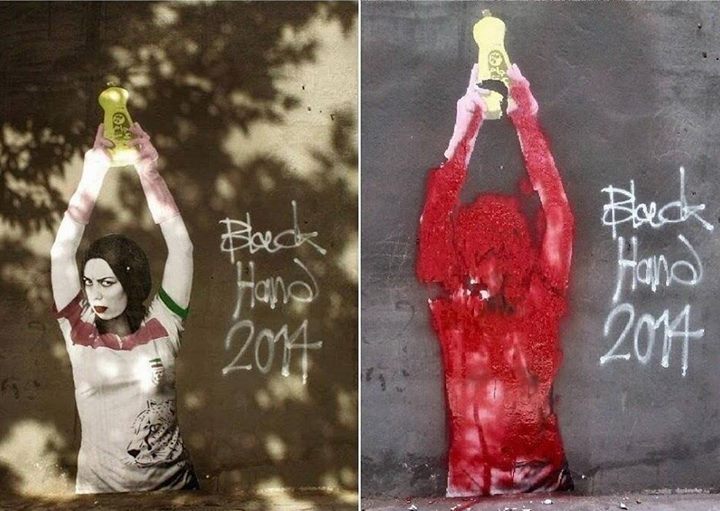 All the examples we wrote about in our last War on Women post where metaphorical. They didn’t speak of an actual war involving violent skirmishes and fights, though the result of the metaphorical battle can be just as bad. We’ve got plenty more metaphorical examples to add here, but also examples of actual fights. For instance, did you read the incredibly sad news of Libya’s top women’s rights activists Salwa Bugaighis being killed in her home by onknown assailants? Salwa, a prominent lawyer, was identified as perhaps “the most charismatic figure in Libya’s women’s movement, supporting a successful campaign to establish minimum quotas for female lawmakers in parliament. She also opposed moves to make the wearing of the hijab compulsory, and her views brought her into conflict with the Muslim Brotherhood and Islamist extremists.”

In Tehran, Iran the feared morality patrol tried to enter university grounds to arrest a woman for not being covered correctly. The result was a fight between the patrol who reportedly used pepper spray and the campus police who tried to keep the patrol  out. What is surprising is that while the morality patrol is so feared, apparently they were forced to apologize to the head of the university.

The latest piece by prominent street art collective Black Hand, as well as the subsequent reaction illustrates beautifully what today’s women’s struggle is about in Iran. While the men get to enjoy games in national stadiums even female parliamentarians say women should stay at home to run the household. Witness the black hand piece, a woman in the shirt of the national football team proudly holding a golden bottle of the dishwashing detergent brand Jam, which in persian also means Cup. Only a few days later the piece is covered by red paint, wiping even the image of the woman from the public eye. Of course the dishwashing detergent survived the attack.

When London based journalist Masih Alinejad started the My Stealthy Freedom Facebook page and inspired women from within Iran to send pictures with their hair uncovered, the Iranian government responded in a sickening manner: On national media a fabricated report was spread that the morally loose Masih was drugged and gangraped in the London subway in front of her child. Alinejad’s reponse was to go to the subway where she was allegedly raped and sing a song about her lost homeland. Basically she said that while in this land of the infidels where according to you a loose woman like me is raped I get to walk looking how I like and sing what I want. Either of these would be impossible in my homeland.

The response of the government? Make a propaganda cartoon where the internet and Facebook are a dark forest and young girls get entrapped digitally by a sexy Disney witch version of Masih.