Some days ago we were discussing the plight of gays, lesbians and transgenders with a few of our Iranian colleagues. One of them had an issue to raise: “Homo acceptance is all fine and well, but the way Europeans deal with it is a step to far. For instance, is it really necessary to parade on boats with your privates hanging out? Why does society encourage that kind of behaviour?”

Her comments made me realize again how much in the mind of people homosexuality is linked with sexuality. It’s no wonder, sexuality is even part of the word. However, when speaking to queer folk who live in or have left the Silk Rope countries the saddest stories you will hear are not about sex. They’re about love. In Middle Eastern countries more men and women have had sex with the same gender than people in the West. It’s the ability to nurture a loving relationship that’s the real social taboo.

A gay refugee I spoke to moved me to tears when he told me what love and its absense meant to him: “In Iran I’ve had sexual relations with boys and men. None of them identified as gay. The boy who took my virginity slept with me many times, but when I told him I was in love with him he threatened to tell my parents of my perversion. In school I fell in love the same way a straight boy or girl does. I also got clammy hands and tongue tied in the presence of a person I might like. But for thirty years I couldn’t even look in the eyes of someone I was in love with for fear of betraying my feelings, let alone imagine a future where we would share a life together. All I want is for the person I love to be there when I come home and massage my weary shoulders, someone I can make breakfast for on my day off. You know, the little things.” 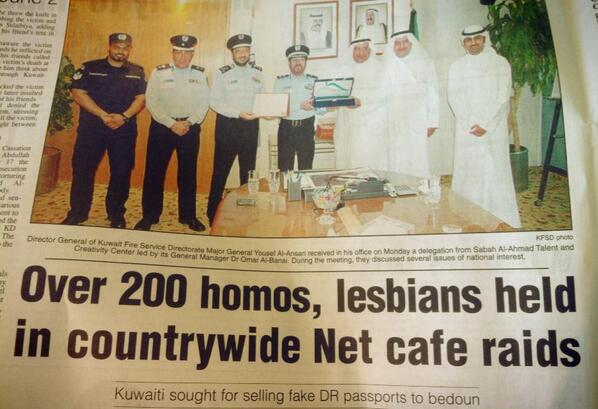 It’s knowing stories like these that makes me extra angry when I read about the treatment of our gay communities. Only a few days ago Kuweiti police arrested over 200 gays and lesbians in a series of countrywide raids. What do you think such arrests will accomplish? Stopping gays and lesbians from having sex? Good luck trying to stop young men and women from doing what hormone filled bodies have desired to do since mankind walked the face of the earth. What will have a hard time is the development of love, the ability to foster healthy relationships.

Listen, there are not many religions that don’t claim to be motivated by love. For Christians Jesus is the embodiment of love. Muslims invoke the name of God by calling him the most merciful. Both religions have holy books with lines that condemn homosexuality. They also have verses that allow the abuse of women, children, minorities, infidels and pretty much anyone else you can name. Many Muslims and Christians have let their personal moral compass decide what verses to follow and which ones to ignore. They use their personal ability to discern what adds to the love in the world and what takes it away. Still too often it goes wrong of course. Such as the example of former Kuweiti candidate member of parliament Salwa al-Mutairi proposing a law that allows the sale of female non-Muslim prisoners of war, to be purchased as sex slaves by Muslim men, protecting them from the sin of cheating on their wifes (according to her logic sleeping with a sex slave is not considered cheating). All this of course backed up by fatwas given to her by various scholars and clerics.

Opinions such as al-Mutairi’s are despicable for many believers and unbelievers alike, and the only way to make sure they become a thing of the past, is to consistently choose the opinions, courses of action, verses of holy books and lines of dogma that increase the love  around us. And if you ever find yourself doubting what love could look like, take a few minutes and watch this beautiful clip of a man talking about the love of his life. In fact, do your self a favor and watch the video right now. This is type of stories we want everyone could tell: